Japanese forex brokerage Money Partners Group (TYO:8732) reported on Tuesday its preliminary consolidated operating revenue increased by an annual 5.9% to about JPY 1.7 billion in the first quarter of 2016. The amount is higher than any quarterly value posted in 2015.

The broker posted the lowest consolidated operating revenue for the quarter of JPY 528 million in March, which represents a decline of 5.5% from the previous month and a slight drop of 1.1% from a year earlier.

The group saw its forex and contracts for difference (CFDs) trading volume falling 27% over the month to 70.2 billion account base currency units. Year-on-year, the figure represents a drop of 25.3%. The broker did not provide a volume converted into a single currency. It explained the monthly decrease with

“Although the business days increased by 2 from the previous month to 23, it was not enough to recover the decrease in the trading volume due to the lower volatility rate,” the brokerage said in a notice. 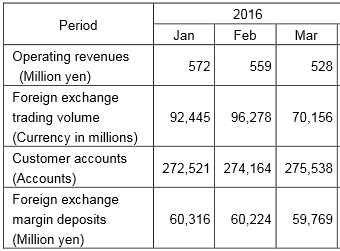 Client trading accounts with Money Partners Group stayed flattish on the month to 275,538 in March, posting a jump of 7.4% from March 2015. Client margin deposits from forex operations also stayed flattish over the month at JPY 59.8 billion last month, while growing 22.2% on the year.

Meanwhile, GMO Click Securities and FX Prime, both part of Japanese forex brokerage group GMO Click Holdings, both suffered significant drop in retail forex trading volumes in March to close to JPY 108.85 trillion and about JPY 7.7 trillion, respectively. Monex Group, another Japanese forex brokerage house, reported a trading volume of $28.3 billion in March, or down by 34% from the previous month when it saw the largest value for the past year.

Tokyo-based Money Partners Group is a holding company which is comprised of forex and contracts for difference (CFDs) broker Money Partners and financial system development company Money Partners Solutions. It serves both retail and institutional clients.