2016-05-27
Henry Hughes
Home
All News
IG Group political binaries: 81% of traders think there will be no Brexit

Eighty-one percent of the clients of UK’s second-largest broker IG Group (LON:IGG) believe the UK will stay in the EU and there will be no Brexit. The result, according to IG, is a new high for the Barometer since its launch in February 2016. It is based on the political binary options IG has set up for its clients to trade on.

The Barometer is an indicator of what those traders are predicting will happen in the 2016 UK referendum on membership of the European Union. 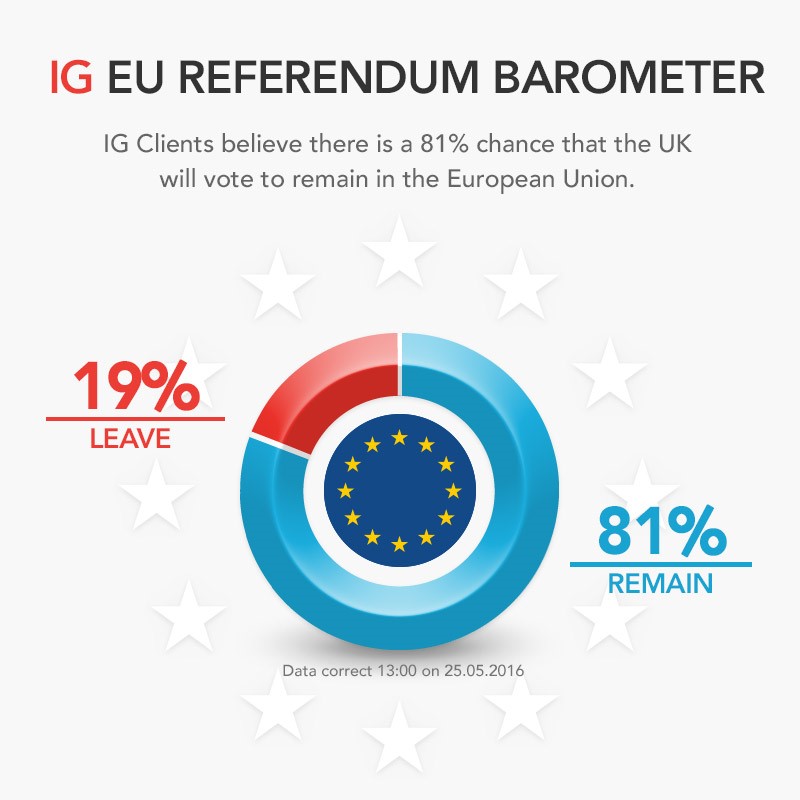 “Our binary market has consistently shown a strong likelihood that the UK will vote to remain in the EU, demonstrating that traders are choosing to look favour the results from phone polls over online polls when setting their expectations. Our political binaries have shown a high success rate in predicting the correct outcome in previous elections and referendums. The pattern we are seeing is similar to the Scottish Referendum when markets remained solidly for a NO victory throughout the campaign,” said Matt Brief, head of dealing at IG Group.

At the same time, a survey conducted by the UK polling agency Survation earlier this week, revealed that 54% of the voters were in favor of the UK staying in the EU. The survey is part of a common initiative of IG Group and Survation that launched in the end of April. 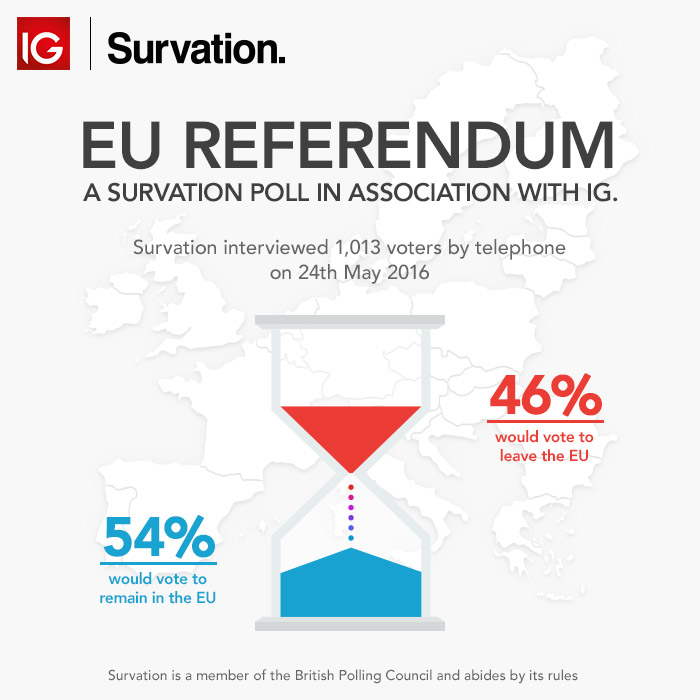 The initial results from the poll among 1013 adults in the UK showed that 44% were in favor of remaining and 38% were for leaving the EU and 18% were undecided. The pollsters, however, “pressed” the undecided to answer how would they have voted if the referendum was now, and obtained the final results.

Meanwhile, about a month before the referendum in the end of June, the results are still neck in neck, with a slight advantage for the “yes” vote, while analysts and regulators warn of the risks of a Brexit.

London-based IG Group was set up in 1974 as a spread betting provider, the first UK-based one at the time. Since then it has expanded to also offer trading in contracts for difference (CFDs), forex, binaries, and stocks.

It has more than 136,000 clients that are served from offices in 17 countries across the EU, the US, Asia, and Africa. The group operated under the IG brand worldwide, and as the Nadex derivatives exchange in the US, after in 2012 it merged the brands IG Index and IG Markets into a single one – IG.

IG Group’s lead regulator is the UK’s Financial Conduct Authority (FCA), but its subsidiaries are also regulated by the relevant authorities in the countries where they operate. It is also a licensed bookmaker by the UK’s Gambling Commission.

Survation is a UK polling and market research company set up in 2007. Surveys are conducted via telephone, online panel and face to face market research for a broad range of clients including television, newspapers, charities, lobby groups, trade unions, law firms and political parties. It is best known for its monthly voter-intention polls.