Saxo Capital Markets UK, the UK subsidiary of Denmark’s Saxo Bank, turned to a net loss of £801,800 in 2015 from a net profit of more than £4.4 million a year earlier, despite its revenue posting a double-digit growth, indicated a filing published on Thursday on the website of UK’s trade register Companies House.

The broker saw last year its revenue jumping by 43.1% to £21.1 million from £14.8 million in 2014.  Revenue generated from trading increased 7.4% and that reported from other operations jumped 368%, compared to the preceding year.

The broker provided no explanation about the worsened financial result, paired with a growth in revenue. Following are details about the UK company’s financial metrics in 2015: 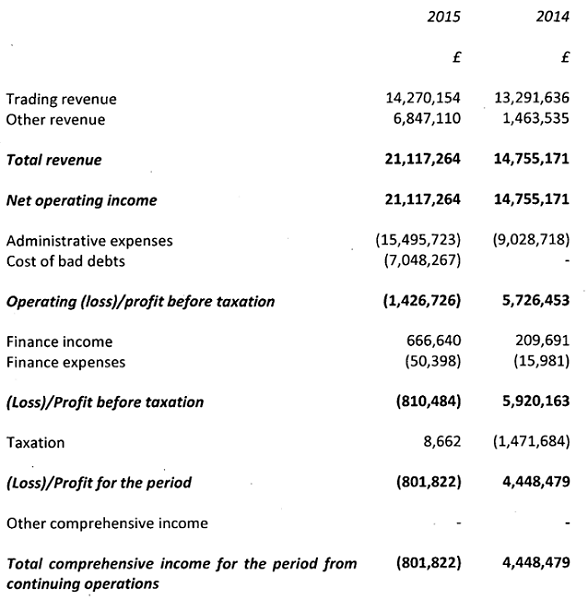 Earlier this year, Saxo Bank group published financial data about 2015. It reported a net loss of DKK 645 million in 2015, compared to a stable net profit of DKK 381.2 million in 2014.  The broker said at the time it was heavily affected by the Swiss franc’s surge in value in January 2015, caused by the Swiss National Bank’s decision to unpeg it from the Euro.

Saxo Bank holds a banking license from Denmark’s Financial Supervisory Authority (FSA) and its UK subsidiary is licensed by the Financial Conduct Authority (FCA) of the UK.
acts as a brokerage firm and a market maker, offering trading in more than 30,000 instruments, including forex, binary options, contracts for difference (CFDs), stocks, futures, and bonds. It also offers traditional banking services through its unit Saxo Privatbank. The group works with retail and institutional clients alike via 25 offices and has subsidiary companies across Europe, Asia and the Middle East, Australia, South America, and South Africa.