Plus500 (LON:PLUS), one of the major forex and CFD brokers, reported that in the first nine months of this year its revenue rose 14% to $236.3 million.

According to the broker’s Q3 trading update for the three and nine months that ended on September 30, 2016, trading remained consistent with the report on H1 2016 and the company has continued to see strong growth in new and active customers, as well as revenues.

The revenue from “high value customers”, particularly from Western Europe, which accounted for 75% of total revenue in Q3, remaining unchanged from the same quarter of last year.

In its report Plus500 notes a continuing rise in new and active customers and continuing decrease in customer churn, which the company believes will have a beneficial long term effect on the Company’s income and a short term impact on ARPU. 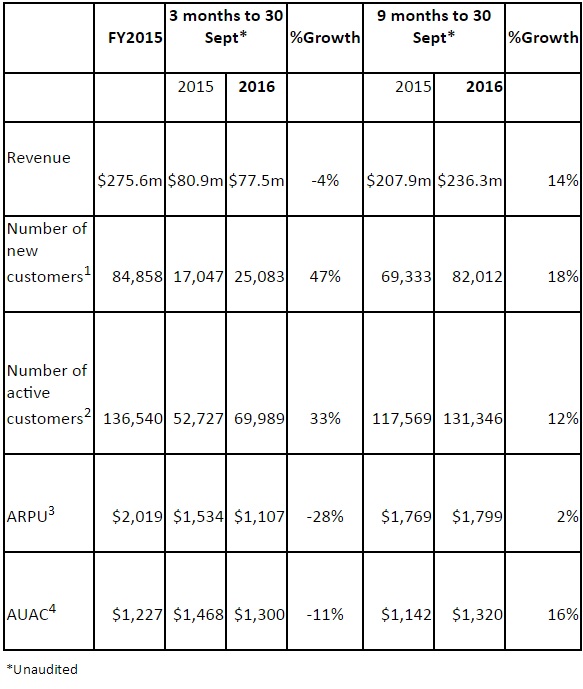 “Our third quarter continued the strong progress of the first half, with a significant number of new customers being gained, and margins recovering”, said Asaf Elimelech, Chief Executive Officer of Plus500 We remain on track to achieve our expectations for the year as a whole.”

In Q3 2016 Plus500 saw some major developments. The broker became one of the first to obtain a forex trading arena license in Israel, while its Australian unit for licensed by New Zealand’s FMA.

Also in September, the founders of Plus500 – Alon Gonen, Gal Haber, Elad Ben-Izhak, Omer Elazari and Shlomi Weizmann, have sold a combined 13% (15 500 000 shares) of the existing ordinary shares of the company and pocketed £100.75 million.

Plus500 is licensed by three other regulators, besides FMA and Israel’s ISA – the Cyprus Securities and Exchange Commission (CySEC), UK’s Financial Conduct Authority (FCA), and the Australian Securities and Investments Commission (ASIC).