The share of new Plus500 customers who sign-up via Windows desktop devices has progressively on the decline, reaching close to 0% in the past three quarters, according to an investor presentation for 2016 published on the website of the broker. Meanwhile, sign-ups of new clients via mobile devices have become the norm for traders with the broker.

The number of new clients who prefer the desktop version of the Plus500 platform has been on the decline at least since the beginning of 2011.  Web-based trading has also somehow lost its attractiveness in the resent quarters, although not as much as desktop trading. 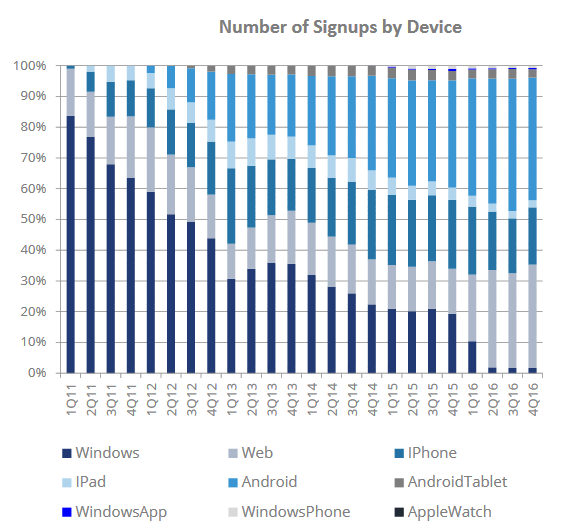 The broker also provided data about revenue by device, which was similar to sign-ups. Desktop revenue has progressively been dropping, reaching the highest value in Q4 2016. Meanwhile, revenues generated from clients using Android, iOS and Windows mobile devices have been performing better.

The data provided by Plus500 confirms the ongoing trend of shift from desktop to mobile trading. More and more brokers are putting a stronger emphasis on the marketing and development of mobile solutions.

Plus500 offers trading in forex, options, contracts for difference (CFDs), commodities, indices, and exchange-traded funds (ETFs). It operates its own online trading platform for CFDs available in over 31 languages on desktop and Android, Windows and iOS mobile operating systems. According to Investment Trends report from July 2015, it is the second largest CFD provider in the UK.