Multi-asset brokerage E-Trade Financial Corp., operating under the E-Trade brand, said on Friday its daily average revenue trades (DARTs) amounted to 159,215 in April 2016, which is 1.3% higher than 157,242 in March. The broker published data for both and March and April at once.

In March the broker posted its lowest DARTs value, after starting the year strong with DARTs of 175,346 in January, following very slow month in December 2015 with DARTs of 147,688. In April, however, its DARTs was stable, posting a growth of 1.3% on the month and 1.1% over the year.

E-Trade’s client assets stayed flat on the month at $284.9 billion at end-April, posting an annual drop of 5.7%. Brokerage customer assets stood at $248.2 billion at the end of last month, while net new ones were negative $4 million. The broker provided relevant data about its banking operations, as well: 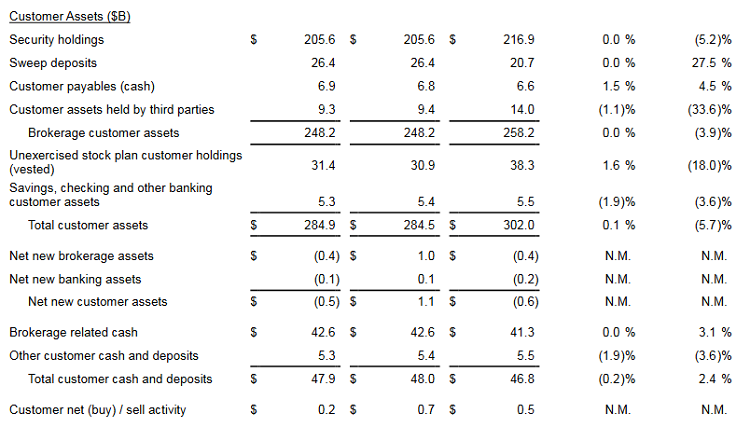 The broker handled 5,035,077 accounts at the end of April, after adding 60,263 gross new accounts during the month. The total figure is flattish over the month and 4.5% higher than a year earlier. Brokerage accounts totaled 3,264,866 last month and new ones were 34,724. More details follow:

In comparison, in April US-based brokerage Interactive Brokers posted a DARTs of 662,000. Meanwhile Monex Group, a Japanese forex brokerage group, had DARTs of 299,629, while its units Monex Inc., which is in charge of its Japanese business, and TradeStation Group, which is in charge of its operations in North America and Europe, saw their DARTs at 189,416 and 110,929, respectively.

New York-based E-Trade Financial Corp., offers various financial services, online brokerage and banking services. It works primarily with retail clients through its 30 offices across the US.