The Cyprus Securities and Exchange Commission (CySEC) said on Tuesday it has wholly withdrawn the Cyprus Investment Firm (CIF) license of forex brokerage UBFS Invest powered by Moneychoice Brokers Ltd., doing business as UBFS Invest. After a series of license suspensions due to noncompliance, the broker is no longer under the CySEC’s regulatory wing and cannot target local citizens.

UBFS Invest should cease to provide investment and ancillary services for which it was previously authorized. The company has three months to settle its obligations arising from the license withdrawal.

The decision was taken by the CySEC’s board on 28 November, the regulator said.

UBFS Invest’s license was initially suspended in May and later the suspension was extended three times – in June, in August and in September. The regulator accused the broker in non-compliance with the authorization requirements, including maintaininga negative capital ratio and insufficient own funds, as well in not making adequate arrangements to safeguard its clients’ rights, taken into account its clients’ money deficit.

The broker obtained CIF license in mid-2014. It operates via the websites www.moneychoicebrokers.com and www.ubfsinvest.com. CySEC said it has called the company to change the information on its website so that it reflects the CIF license withdrawal. The change has already been entered in the regulator’s website.

Allthough UBFS Invest’s website states it is in the process of updating and is not accessible, the broker has issued a notice with which it informs investors the company’s CIF license is suspended. It mentions nothing about license withdrawal. 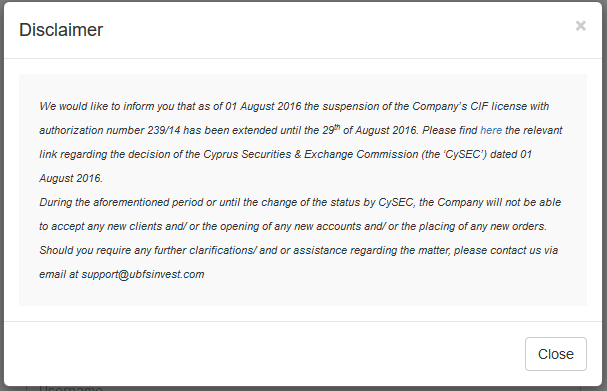 Cyprus is among the main regulation destinations of choice for most forex (and binary option) brokers that seek to operate in the EU. CIF licensees are free to expand within all countries in the European Economic Area (EEA) thanks to a EU directive.

As a EU member, Cyprus requires all financial entities to hold a license by the relevant authorities in the country or any other member state in order to provide financial or ancillary services.