It seems that the trading scams are getting ever more sophisticated and shameless, yet ingenious. The latest one involves the world famous physicist Stephen Hawking and CNN.

According to a report of the popular site Buzzfeed, a fake news site, which has practically cloned the design of the CNN site, is promoting “The Hawking Code”. This allegedly is a trading algorithm supposedly developed by the illustrious physicist Stephen Hawking who is otherwise filling his time with exploring and explaining the Universe and being the director of research in the department of applied mathematics and theoretical physics at the Cambridge University. Buzzfeed contacted the university, which confirmed Hawking is not involved in any financial products.

The fake site, cnn-trending.com, which has already been disabled, features a lengthy interview with “Stephen Hawking” who claims he developed the trading algorithm with the sole purpose of “redistributing wealth”. “I hope that by 10 years, with the help of my code, there will be no significant lower and upper class and the wealth will be evenly distributed between hard working people,” “Stephen Hawking” said in the article entitled “Stephen Hawking Develops a Computer Code Unlike Any Other”.

The fake news site is so elaborate that its authors bothered to create a fake Facebook page for “Eric Brauer” – the “CNN journalist” who interviewed “Stephen Hawking”.

Naturally, The Hawking Code is free to use and promises fantastic profits without any effort from the investor. Of course, the profits can be “cashed out at any time”. The hawkingcode.com site has also been disabled and returns a “503 Service Temporarily Unavailable” error. 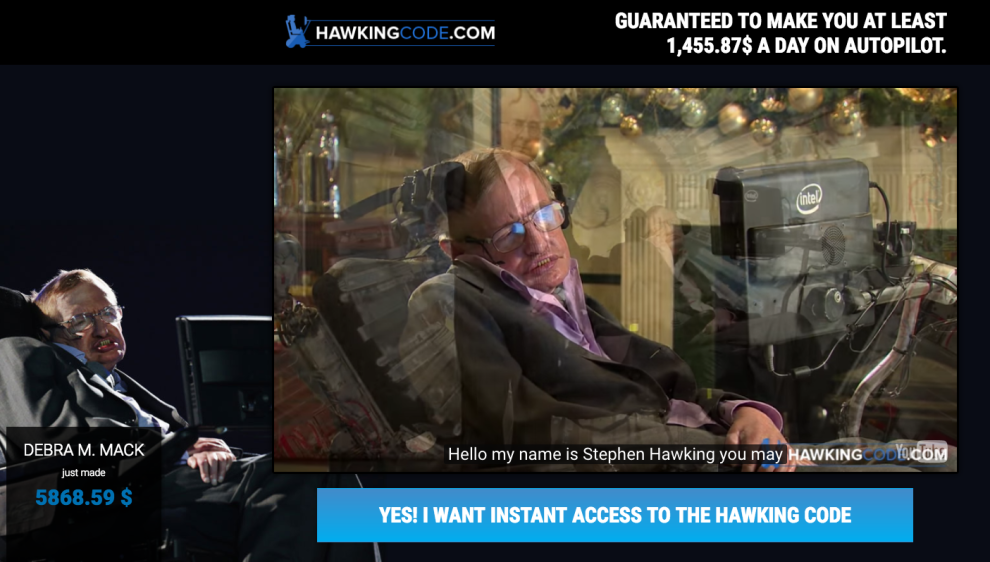 According to Buzzfeed, however, it has meanwhile managed to scam a significant number of people out of their money by leading them to the Option.fm. It is an unregulated offshore binary options trading platform, which requires a $250 minimum deposit.

According to its site it is owned by Artemis Technologies Ltd, based on the St. Vincent & Grenadines, while the billing is handled by Artemisia Services, based in Sofia, Bulgaria.

Option.fm is a binary options broker which has been repeatedly warned against, but apparently continues to work undisturbed. In its warning the Australian Securities & Investment Commission noted Option.fm, also operating as Option Financial Markets, could be a scam.

On another hand, the “free trading algorithms” for binary options is also a very popular scam – there is the Canuck Method, the Metodo Italiano, the Swiss Methode, the Danske Metode, etc. Those, however, were using the “credentials” of ordinary guys – charitable mathematicians who decided to share their trading algorithms with the world.