Multi-asset brokerage E-Trade Financial Corp., operating as E-Trade, reported on Thursday its consolidated net revenue totaled $472 million in the first quarter of 2016, posting an increase of 7.5% over the month and an annual growth of 7.0%.

Revenue from commissions, fees and service was $165 million in the January-March period, while net interest income amounted to $287 million. The total amount also includes $10 million gains on securities and other instruments.

Group net income jumped to $153 million in the first quarter, which is 72% higher than in the previous quarter and nearly triple the value posted a year earlier. The amount includes a $31 million income tax benefit related to the release of a valuation allowance against state deferred tax assets.

“We started the year with respectable business growth and exceptional levels of capital deployment. While economic uncertainty persisted throughout the quarter, our customers remained active while generating healthy levels of new accounts and assets,” said Paul Idzik, E-Trade CEO. “We also took advantage of market conditions to accelerate our share repurchase program and aggressively return capital to our owners, completing nearly half of our $800 million authorization in just a few months,” he added.

The broker also said it handled 10.1 million trades during the quarter. Its daily average revenue trades (DARTs) numbered 165,122 at the end of the quarter under review. In comparison, in the previous three months, the DARTs were 146,949 and for the same quarter in 2015 the value was 3% lower at 169,951.

Total customer assets went down to $285 billion at end-March from $288 billion at the end of the prior quarter and $299 billion a year earlier. Customers were net buyers of approximately $1.2 billion of securities during the quarter under review.

Meanwhile, the number of client accounts of E-Trade group increased by 45,000 over the quarter to nearly 3.3 million in January-March. More details about the group’s clients accounts by type follow: 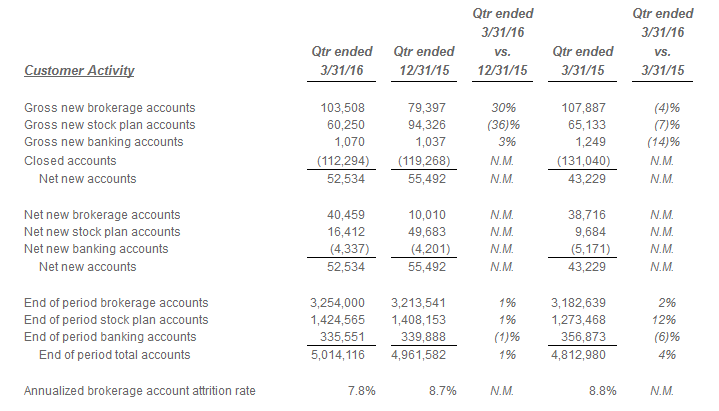 In comparison, US-based automated forex broker Interactive Brokers posted a consolidated net revenue of $489 million in January-March, while Plus500, a UK-based online forex group, reported a a record-high quarterly revenue of $85.2 million in the first three months of the year. Meanwhile, in Japan, GMO Click group had an operating revenue of JPY 6.7 billion in the quarter under review, and that of Money Partners Group amounted to JPY 1.7 billion.

New York-based E-Trade Financial Corp. offers various financial services, online brokerage and banking services. It works primarily with retail clients through its 30 offices across the US.