Japanese forex brokers’ trading volumes from both over-the-counter (OTC) and on-exchange retail forex dropped to their lowest values since the beginning of the year, indicated data published on Wednesday by the Financial Futures Association of Japan (FFAJ). Retail OTC trading volumes declined by 5.3% over the month to JPY 416.4 trillion in April 2016, while exchange-traded dropped 14.9% month-on-month to nearly JPY 3.2 trillion. Compared to April 2015, OTC volumes dropped by 10% and on-exchange volumes went down 3.7%.

Meanwhile, the combined volumes from binary options trading that brokers generated in April went down by 9.6% from the previous month to nearly JPY 36.5 billion. The figure represents a decline of 12.4% from a year earlier.

The USD/JPY continued to be the most traded currency pair in Japan. Forex brokers’ combined volume from trading in the currency pair dropped 2.8% over the month to JPY 389 trillion in April, while the volume of trading in binary options on the USD/JPY stood at JPY 17.7 billion, or 8.3% less than in the previous month.

The regulator’s monthly report showed that in the forex segment open positions were on decline in April, while the JPY short positioned remained at levels close to those a month earlier, resulting in a JPY 568.8 billion increase in net JPY short positions. 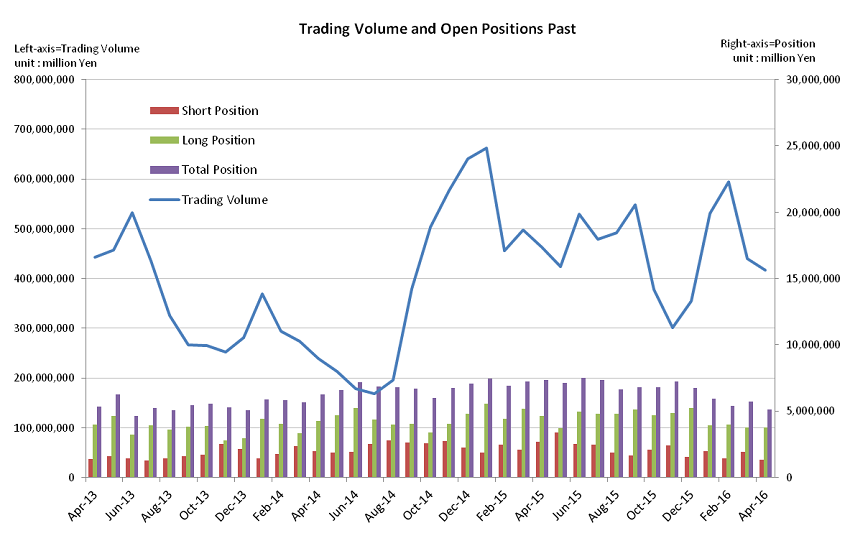 Meanwhile, Money Partners Group, also based in Japan, reported a trading volume of 74.4 billion in account base currencies. The broker did not provide a volume converted into a single currency, neither comparative figures. Although the broker’s volume dropped by a monthly 5.1% to JPY 103.3 trillion, it firmly maintained its leader position. Monex Group, which usually publishes similar information, provided no trading volume data for April.